This week we have the Legion making a mess of things in Legion of Super-heroes #3.  The Teen Titans fight to free Djinn in Teen Titans #38.  Ric Grayson fights off the Court of Owls control in Nightwing #68.  Orion and Jessica Cruz fight Darkseid’s minions in Justice League Odyssey #17.

Superboy had brought Robin to the future, which turns out to be a huge mistake.  Robin doesn’t do anything, but the Legion freaks out that he’s here.  Apparently there’s something in his future that is very troublesome.  Ultra Boy, Mon-El, and many others go to Rimbor to talk to Ultra’s father, and end up having to arrest him.  Saturn Girl tries to interrogate Mordru about the trident that everyone wants, but that doesn’t go well either.  I commend the artist’s for being able to include so many Legionnaire’s in the panels.  I question if it was worth it.  There is a lot going on in the art, and it’s making things a bit chaotic.  And maybe they were going for chaotic, because nothing is going right for the Legion.  The book also just kind of abruptly ends.  It’s not really a cliffhanger.  It felt like there could have also been another page or two following the last page.  The alarm is sounded, the trident is stolen, and there may or not be a mysterious figure in the last panel because there is a silhouette of an arm.  However, no one really reacts like they are surprised, so I’m not certain what is going on. 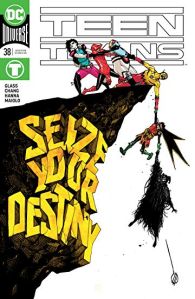 Roundhouse apologizes to the Teen Titans for essentially turning on them, but promises his heart was in the right place.  The Other offers to set Djinn free if Damian will take his place.  He sends Damian into Djinn’s ring to talk this over with her.  Eventually, the rest of the Teen Titans show up, and they all fight The Other.  I think was a powerful moment when Djinn shows Robin what would happen if he became The Other, and it’s everything he always wanted.  But he turns it down, because he knows he should not be given that much power.  There is one thing I noticed with the art that felt was interesting.  In the first 2/3rds of the issue, the panels are fairly consistently in some type of grid format.  Ninety degree angles.  The exception being the page where Roundhouse is giving his apology, and he’s the center of focus in the center of the page and the others are reacting in panels around him.  Once the action picks up, gone are the right angles, and everything is slanted.  As I’m following the action, this shift makes the action pop, because it’s something new for the eye to see. 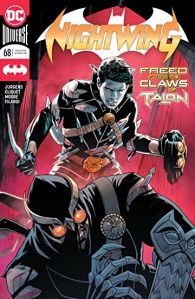 The Ric Grayson saga seems to be drawing to a close.  Some quick background since this is the first Nightwing entry I’m writing.  The memory loss wasn’t exactly due to the bullet, but rather the Court of Owls trying to bury his memories so that they could implant new ones so that Grayson could take his place as a Talon.  It was working until the memory implant goggles got shot off of him last issue.  This issue is when his old, original memories start flooding back in.  This allows Grayson to regain control of himself and fight his grandfather, who is a Talon.  The whole Ric Grayson thing has been better than I was expecting, and while I do want to see him interact with the Bat family again, I don’t want the new characters to be completely cast aside.  While I do like the use of negative space in the fight scenes, I think the use of what I’m calling the “action background” is a bit too much.  What I’m talking about is when the background is a solid color, with action lines coming out of the center.  If you’ve messed with photo mode on Spider-Man, then you’ve seen it.  It’s a fine thing to use once or twice in an issue to make a moment pop, but on the 5th time, you’re starting to get some diminishing returns.

Blackfire (Starfire’s sister), De-Starr (the cat Red Lantern), and Hax fight off a bunch of sentry robots, only to find the massive secret they were protecting.  Meanwhile, Orion and Jessica Cruz are able to escape their confines, and attack Darkseid’s minions, which includes Cyborg.  There is a nice little mystery of how much, if any, control does Cyborg still have over his body.  He’s embedded messages into Jessica’s ring, which doesn’t technically exist on its own anymore (it’s basically a part of her).  And even though all we see Cyborg saying is “ping,” it does seem like he’s interacting with the other big minion in a way that’s not technically against Darkseid’s programming, but also helping Jessica as much as he can.  There is a fairly awesome moment late in the issue.  It’s a double-page spread of Orion putting on his armor.  The top sections of the pages have individual panels for each piece of armor, with the bottom showing him in full action.