We are back for 2022 Today, I’m taking a look at Immortal Orphans #1, a new series from local writer/artist, Carter Mann. As with my posts, this is your ‘Spoiler Warning’: proceed with caution.

Immortal Orphans takes place on – rather, under – Earth, far into the future. Humans live in underground settlements called Hives. In 2400 A.D., there is only one Hive left: the ‘Delta’ Hive. We don’t know what forced humanity underground, or what destroyed all but the Delta Hive, yet.

I will divide the introduced players in this story into 3 groups: Probably Good, Probably Bad, and Unknown. More info on these characters later, but here are the groups:

The story starts with Gannon and Arti, in the Delta Hive, 2420 AD. Arti is telling a lot of bad baseball-related puns, while trying to fight/arrest(?) Gannon for theft; the two seem familiar with each other. Gannon is captured and taken away, with Arti relaying the message that “she wants to see you.”

We then jumps backwards to 2200 A.D. You find out that there are Hell-Holes: giant pits where waste is disposed, owned by the Durand Corp., a genetics company that isn’t what it seems. Julien Durand not only owns the company, he is also the country’s leader. We see two people unloading a truck full of “waste” into one of the Hell-Holes: ‘Monster’ and his intern. Intern is fanboying all over an unappreciative Monster. The “waste”: the bodies of the cast of “The Uber-Buber Wonder Town”, all kids(!). Watching all of this is a man, going by the name of Quinn. Quinn sees that bodies are being dumped and confronts Monster and Intern. Quinn easily dispatches the two (with a sword that might be magical – not explained in this issue) and stops the final body from being dumped into the Hell-Hole.

The body is a Cryo-tube, labeled ‘Science Boy’.
There is a flashback to 2010, and the airing of the Uber-Buber show. There is a spoiler in there that I won’t spoil in this post. 😉

Back to 2220 and an info dump on Durand Corp. Think “Umbrella Corporation” but somehow even more evil. Inside the main HQ – ‘Durand Center’ – is where we meet two main characters: Hernia Man (a state-sanctioned superhero, who is imprisoned) and Liberty. Hernia Man is barely lucid, wired to some kind of device. While Liberty is talking to Hernia Man, a squad of Cy-Cops show up. The quick description of Cy-Cops: reanimated citizens, implanted with tech, used as a police force (you’ll have to read the issue for more detailed information). They reveal that Liberty is Liberty Durand, the daughter of Julien(!), and she is under arrest. Liberty does not go quietly.

She defeats the Cy-Cop squad but ‘backup’ arrives: The Twins, Scabs (a massive, undead-appearing figure) and Latex (basically, a walking pile of latex). To add some spice to this encounter, Latex is revealed to be Liberty’s step-brother. A fight ensues; while it’s going on, Hernia Man break free… and runs away… only to throw a Cryo-Tank into Scabs, knocking him into Latex, ending that fight.

We return to 2420 and meet the Porta Luminus, an entryway to another dimension. There are some cool facts about it that are also revealed. It is here that Arti has taken Gannon, and shoots him up with all kinds of nanotech, babbling about the future. Out of the Porta Luminis steps… Liberty(?!), explaining that “this mission” has been in preparation for 30 years.

The artwork for issue #1 is awesome! It’s a unique look and quality to it; I don’t have a style that I can compare it to. The dialogue isn’t too difficult to read or follow. There have been a few stories – on here and on Podicus Wrecks episodes – where we could barely get through an issue because there was waaaay too much dialogue per page, or it was written in a difficult style. This issue is neither.

There was a lot thrown at the reader in this issue, and not a lot of explanation for some of the characters or their motives. For example: what sent the human to Hives? The good thing is that this didn’t detract too much from what was a very interesting story.
Who really is Quinn?
What will happen to Gannon?
What happened to Hernia Man, that got him captured?
I am looking forward to reading and reviewing immortal Orphans #2, in the next few days! 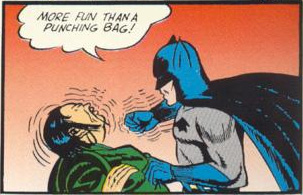